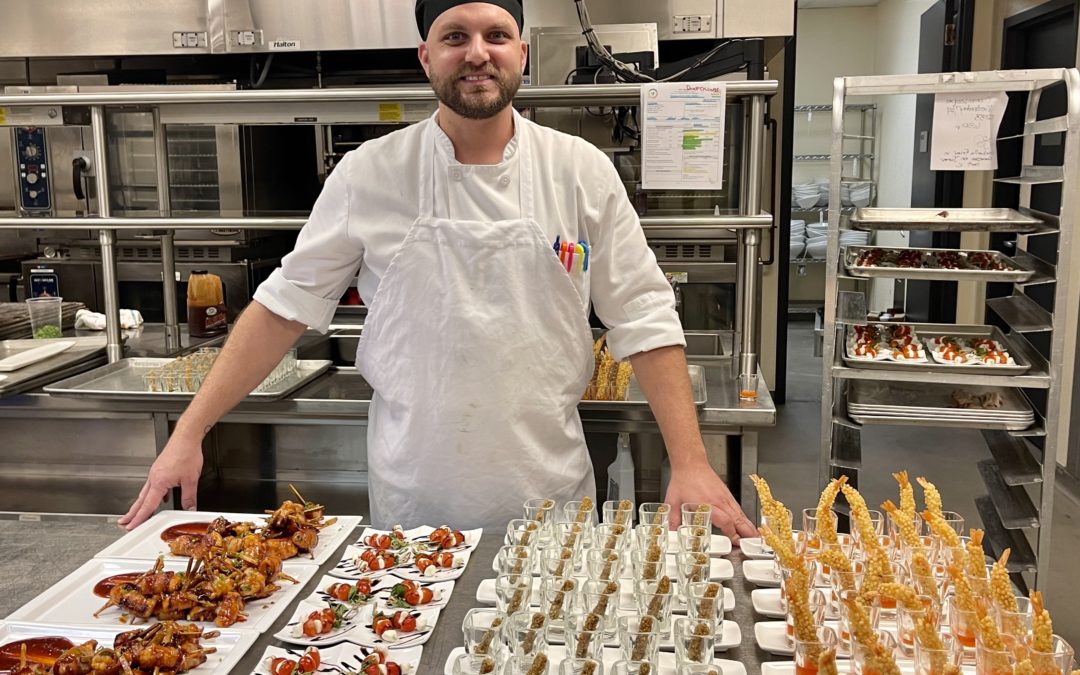 As we continue our series of highlighting our instructors, students, and alumni by telling their stories of successes, aspirations, and inspiration, we sat down with Barry Kammer, a graduate from The Culinary School of Fort Worth in May of 2021.

CSFTW: How did you get your start in the culinary arts?

Barry: It was actually due to COVID. I was just finishing my Master’s degree at UTA for quantitative finance, and two months prior to graduation, when we were sending all of our resumes out to the corporate world, COVID happened and the corporate world shut down. So, two months prior to graduation, I needed something to put food onto the table. I used the GI Bill to go to culinary school because I just enjoy cooking. It was more of a hobby and something that I just wanted to learn how to do better at home before going back into the culinary world. I really went because I wanted to, and I was grateful for the opportunity that the Navy gave me to do it.

What made you decide to pursue this professionally instead of going back to the finance world?

Well, while I was in the Navy, I messed up my knee. I have half of a prosthetic knee which makes it very hard to move around in the kitchen. I did my externship at Legends [at AT&T Stadium], and when I was done, I told my chef that I’d like to continue on with finance once something opens up in that department either at Legends or another branch of AT&T Stadium. In the meantime though, I wanted to give 110% in the kitchen. I told him that I wanted to do whatever needed to be done. I wanted to create and learn more in the kitchen however he wanted to use me. I went in with a “can do” attitude, and when I didn’t know what to do, I would ask what I could do to help. That opened up a whole new world of being able to do anybody’s job which is really neat because now I can go into the kitchen and complete any task in any department that needs to be done, and I can do it in a quick, efficient, and high quality manner.

Do you envision any possibility of doing both finance and cooking?

You know, I have thought about that. I haven’t spoken with the executive chef yet, but I’m sure that he would be open to it. I’m already trained in the kitchen, so they won’t have to prep me. I’d be able to just step in and do it. I would be totally interested in doing both at the same time.

What gets you excited about going to your job?

I’m a Cowboys fan and have been since I was a little kid. I remember watching them in the Super Bowls when I was a little kid. When I was at The Culinary School of Fort Worth, my kitchen timer was always the Monday Night Football theme song. I know that probably annoyed people, but everyone always knew whose timer that was. I’m just a huge football fan, and so that part of being at the stadium is exciting. I also wanted to go into something that was high volume instead of being a line cook at a high dollar restaurant. So, with that high volume, I am able to see the mistakes on a bigger level. It’s a great way to learn about how a kitchen works.

What’s your favorite station in the kitchen?

It’s definitely plating. I’ve always enjoyed plating. The prep work is kind of like a line at Six Flags. There, you’re in line for an hour and a half to two hours for a two minute thrill ride. Well, in prep, you’re getting food ready for days for a three hour event. You have all of your mise all together, and you can just pull from that and create once it is ready to go out. It’s really breath-taking to be a part of. I want to make things that are going to make your mouth water just from looking at it, before you can even smell it.

When you first started cooking, who were you inspired by in the kitchen?

My parents. My mom was an awesome Texan, soul food cook. My dad enjoyed cooking, but he couldn’t cook at all before my parents met. My mom really taught him how to cook, and then he experimented with stuff. It was that experimentation in the kitchen with my dad while I was growing up that inspired me to want to do more of that. We would try to mix all different kinds of things, and when they worked, it was great. When the mixes didn’t work, we would just laugh and try something new.

What would you say to somebody who is thinking about going to The Culinary School of Fort Worth?