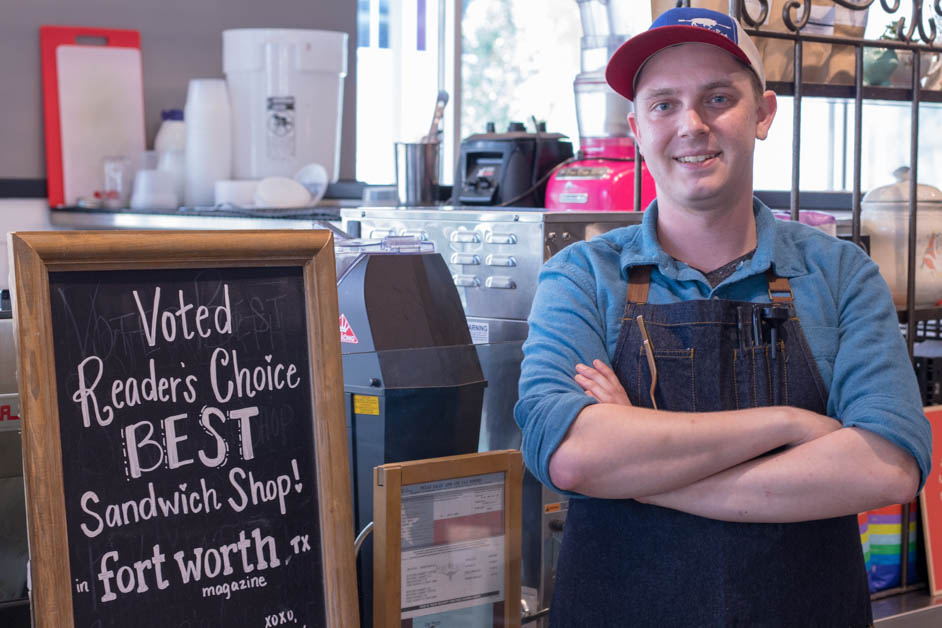 When talking with Jonathan Daniels, The Culinary School of Fort Worth alum and operational chef at Butler’s Cabinet, the first thing that becomes abundantly clear is his passion for food. If given the time, he could spend hours talking about smoking meats, pickling vegetables, plating dishes and everything else culinary. That kind of enthusiasm is part of what has made him so successful just over a year after graduating from The Culinary School of Fort Worth.

Jonathan was born in Arlington, Texas, and he began cooking at a young age. Both of his parents loved to cook at home.

“My mom was your typical Southern cook that did pot roasts and meat loafs which I always loved,” Daniels said. “The first thing I remember ever wanting to learn how to cook was that pot roast.”

But, Jonathan said, it was his dad who really inspired him to get into cooking. His dad would host big barbecue parties while Jonathan was growing up. The hit at the parties would be his dad’s smoker which is what eventually led to Jonathan’s interest in smoking meats. However, this passion took some time to grow.

“At first, I didn’t ever really consider culinary as a career,” Daniels said.

He attended the University of Texas at Austin after high school where he majored in viola performance with an emphasis on classical music. After trying that professionally for a short period of time, Jonathan knew that it was time for a change. He left the music industry to pursue a career teaching special education at an elementary school.

It was during his time as a special education teacher that Jonathan began to fall back in love with smoking meats. Once he left his job as a teacher, he began to feel a sense of failure because he had now had two unsuccessful career paths, but smoking meats was a therapeutic outlet for him.

“Man, I had two careers that didn’t pan out, and I just started cooking like crazy,” Daniels said.

His cooking might have remained a hobby if it hadn’t been for his barber. Jonathan would spend some of his time during haircuts talking about smoking meats at home. This piqued Jonathan’s barber’s interest, and he asked him to smoke brisket for a church function later that week.

“I started smoking brisket for him more often which led to someone asking me why I didn’t use my extra time and money to go to culinary school,” Daniels said. “It wasn’t something that I had really thought of previously, so I was happy to have that push.”

When he started the culinary program at The Culinary School of Fort Worth in 2017, Jonathan was obviously confident in his abilities as a smoker and with making meats. However, he lacked confidence in other parts of the kitchen like baking and plating.

Jonathan said that he never thought that he was cut out for the kitchen, but culinary school ended up being the best decision of his life. It allowed him to ease into life in the kitchen without being thrown directly into the fire.

“Yeah, I was worried about grades and classwork, but I wasn’t worried about paying customers on a day-to-day basis at the school,” Daniels said. “It was the opposite where I was paying the school to be there, so I was going to make the most out of every single day and learn as much as I possibly could.”

“I got pushed incredibly hard, but the payoff was huge,” Daniels said. “I don’t think I would have ended up at Butler’s Cabinet if I didn’t get that learning experience under [Landmark Bar Executive Chef] Jordan [Savell].”

Jonathan took about a month and a half off after leaving Landmark to enjoy some family events and to take a break from the kitchen. During that time, he thought about joining a bakery after gaining confidence in his baking skills at school, but when the opportunity at Butler’s Cabinet presented itself, it seemed like a perfect fit.

“[At Butler’s Cabinet] we really pride ourselves in doing everything the hard way with old world methods,” Daniels said.

This is an ideal situation for him because not only is he able to showcase his skills while smoking meats, but he also gets to play around with fermentation which was a growing passion of his.

Jonathan takes a lot of pride in his work and his skills which has led to him rising in the ranks very quickly at Butler’s Cabinet. The owner, Josh Harmon, has put almost full trust into Jonathan and his coworkers to successfully run the business. Daniels even said that he will be part of the team that trains employees at the new locations when they open up.

Another passion that shines through for Jonathan at Butler’s Cabinet is plating. As mentioned earlier, he did not have a lot of confidence in that area of the kitchen before entering culinary school, but after his experience at the school and his time at work, it has turned into a major point of pride for him in the kitchen.

“Once my food started looking good, I felt better about serving it to people and even felt more motivated to cook better,” Daniels said.

In a world where a lot of people are “eating with their phones first” and taking pictures of everything they order, there is a lot of pressure on chefs to make sure they are producing high quality dishes not only in taste but in appearance. Daniels said that the worst thing that can happen is having a picture of a plate go online and it doesn’t look good. Instead of getting bothered by the constant pictures, Jonathan views it as a challenge.

And knocking them dead is what Jonathan strives for every single day.