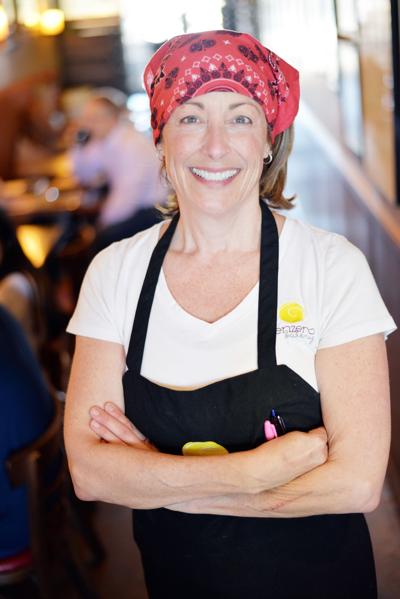 Ginger Blazek is the chef and owner of Zenzero Kitchen in Coppell who made the decision to leave corporate life and follow her dream of being a baker. She says the support of her family and area business owners have helped buoy those hopes.

What brought you to Coppell?

While working as a Corporate Headhunter for a market research company located on Belt Line Road, I was finding it increasingly difficult to commute from South Arlington as I was a single parent of two young children. A co-worker who lived in Coppell suggested that I move here and she cited the excellent schools and short commute as bonuses. That happened in 1994 and I have never regretted that decision.

How did you get started as a baker?

My parents were very encouraging of my five sisters and me and when I expressed an interest in baking they were all for it.  With an Italian and German background, a grandfather who was a chef and a dad with a sweet tooth, we had dessert every night and I was allowed to bake whatever and whenever I felt like it.  Honest feedback was provided and I quickly learned how rewarding it was to make family and friends happy through baked goods.

How did Zenzero get started?

My first job was with a steakhouse chain and my job was bussing tables and sweeping floors.  Within two years I was a shift leader and when I graduated from high-school I was the youngest assistant manager in their system.  A move to Texas in 1983 had me joining Pizza Hut as an assistant manager and I eventually moved into their district / region office as an administrative assistant.  My passion for the food service industry never left and following a very large (90 people), family gathering where I was one of five people cooking for this big group, it was evident that my passion for baking had never gone away.  At the time I owned an executive search firm and I began to bake out of my home, then attended the pastry program at the Culinary School of Fort Worth and as my home baking business grew, my dream grew.  With the encouragement of my very supporting husband, I closed my recruiting firm and we opened Zenzero Bakery in 2012.