The Dock Gives a Scholarship to a CSFTW Student 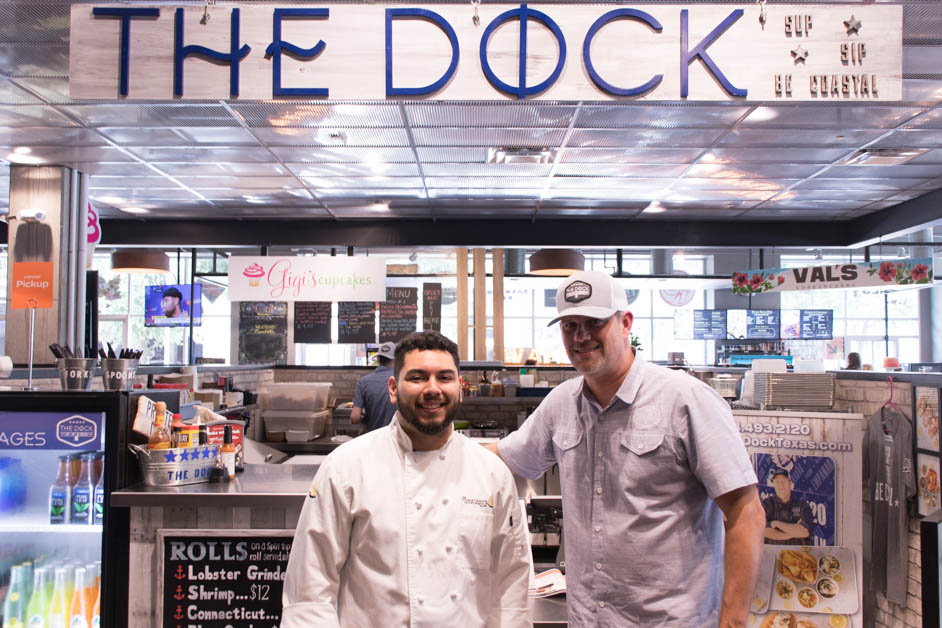 Article and photos by James Creange.

Brett Curtis, owner of The Dock food truck and restaurant, got his education at culinary school and wanted to give back to the next generation of culinary students. Christian Aparicio, Culinary School of Fort Worth graduate and cook at The Mansion on Turtle Creek, was a fourth semester student working through some financial struggles. They were a perfect match.

Brett Curtis started raising money to give a scholarship to a student at The Culinary School of Fort Worth by selling raffle tickets with the winner receiving a new motorcycle. He coupled that money with a significant donation from The Dock to create what he would like to be the first annual scholarship that he gives to the school.

“I wanted to give someone else an opportunity to do what I do,” Curtis said. “If they stick with it, their hard work will pay off, and I felt like this money could alleviate some of the stress.”

When Christian Aparicio heard about the scholarship, he immediately submitted a one-and-a-half-page essay stating why he would be a worthy recipient.

“I was working six days a week on top of school in order to be able to pay for my education and all of my bills,” Aparicio said. “This scholarship meant that I could be a little less worried about all of that.”

After a thorough review by Brett Curtis, Aparicio was awarded the scholarship.

For Aparicio, culinary school was always a dream of his, but he didn’t know if it was a realistic opportunity. After spending a year and a half in a nursing program, he decided to “just go for it.”

“I love being in a kitchen,” Aparicio said. “The environment, the fast pace and the bond that you form with your co-workers are all great.”

Curtis loved that fast-paced environment too. He also wanted more interactions with customers, so he decided to leave his corporate chef job and open up The Dock food truck in 2016 on a part-time basis.

Initially, The Dock, which specializes in lobster and seafood rolls, was operating only in Dallas and Plano. After a short time, the truck was going all the way out to east Texas because the demand for this kind of food was booming.

“I’m from Maryland, and I spent summers in Maine, so I saw lobster as a missing opportunity here in DFW,” Curtis said. “I noticed there was nothing here like that in Fort Worth, so I didn’t view the [Crocket Row] food hall as too much of a risk.”

And it didn’t take long for The Dock to be embraced in Fort Worth. With their simple yet delicious menu, they are attracting seafood lovers and northeast transplants to their restaurant.

“We get a lot of customers that say, ‘You’re doing exactly what we get on the east coast’ which is the best compliment that you can get,” Curtis said.

For example, he tried out the lobster mac and cheese as a special. After it became such a big success, he added it to the permanent menu at the food hall, and it is now the second highest selling item on his menu.

In regard to the food scene in Fort Worth as a whole, Brett loves the direction that it is headed.

“Bringing all of these different cuisines to the city lends us to be a sort of melting pot much like the other big cities in the country.”

For Curtis, he knew that in order to be successful with The Dock, he needed to hire the right kind of workers. He has built his company on the core values of trust, integrity and hard work. He sees a lot of that in Christian.

“I think he’s got a good head on his shoulders, and I just want to tell him to stay true to his dreams,” Curtis said. “There’s going to be a lot of hard times and you’re going to have a lot of doors shut in your face, but if he stays true to his passions, he’s going to achieve what he wants to achieve.”

And for Christian, that would mean opening up a small Italian restaurant one day.

“I love making fresh pasta and homemade sauces,” Aparicio said. “I just love everything about Italian food, so I’m excited to get that going.”

For right now, Christian will continue to work as a cook at The Mansion on Turtle Creek and build on his culinary experience.

As for Brett, his delicious lobster rolls (and much more) can be enjoyed seven days a week at the Food Hall at Crockett Row. He also has a full schedule for his food truck listed on his website.