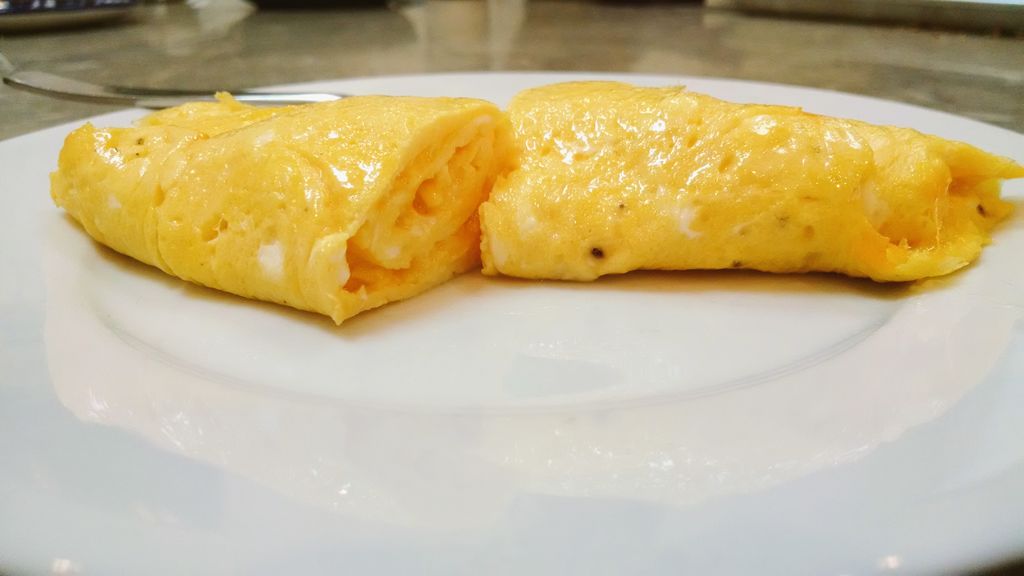 Photos by James Creange and courtesy of Elise Bauer.

“I think I better try that again,” I say as I scrape the pan of eggs directly into the trash. I’m pretty sure that is the fifth egg I have said that to today. And no, I suppose I don’t normally talk to eggs. But today is not a normal day. It is egg cookery and let me tell you, it is harder than it looks. And while it is not exactly considered “fine dining,” I have a whole new level of respect for the spatula wielding egg masters of places like Denny’s and IHOP.

The day starts off well enough. Dice an onion. Check. My knife skills are improving, so the first rotation was a no brainer.

Second, poach an egg. Now as of last week, I had never poached an egg in my entire life. Who likes the yolk to go running all over their plate anyway? I’m definitely more of a smash your spatula down onto scrambled eggs until I’m quite sure there is no moisture left in the egg whatsoever kind of girl. But we got to practice last week and then I went home and made eggs for my son, who obviously inherited the runny egg liking gene from his father. The recipe says 3 and a half to 4 minutes. But at 3 and a half minutes, I got busted last week for the egg yolk being cooked slightly, heaven forbid. I found through trial and error at home, mostly error, let’s be honest, that 3 minutes and 15 seconds is right on the money. So I nailed it at the poaching station on my first try.

I’m feeling pretty good about myself, and soft scramble is next. No spatula smashing for me. When they look barely edible, I pull them off the stove and plate for the chef. She can see some pieces of egg white, so I have to start over. Who knew that you actually have to scramble your eggs beforehand. Like a lot. Not just the stir it around with your spatula while they cook in the pan, but actual beating with a whisk until your arm is tired and the eggs are bubbly. Two more tries and one sore arm later, I have nailed the soft scramble.

Now let’s talk for a minute about the French. I have learned in the culinary world that when they talk about cooking things the French way, or classic way, it is really just layman’s terms for the hard way. Our next stop is omelettes, but not good old American omelettes where you cook the eggs, put on your topping and give it a good fold. No, we are making classic French omelettes that have to one up the Americans and give it two folds. 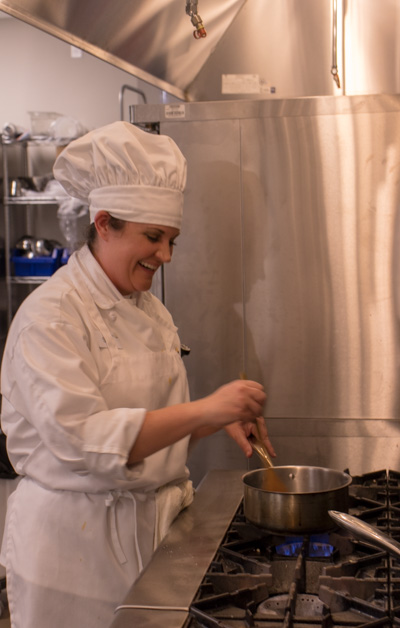 So, you take your eggs and scramble them like we did in soft scramble, I’m really starting to get some arm muscles now. Then they go into the hot pan and you have to stir them around until they really start cooking, and right before they turn into scrambled eggs, you smooth them out, fold them into a third, then back onto themselves, giving you a nice seam down the middle. Then you take your pan and literally flip it onto a plate so that the seam is down and you are left with a football shaped omelet. Do the French even play football?

The next station I have been dreading all day. Over easy. First let me say that whoever named this kind of egg over easy is insane. There is nothing easy about flipping an egg over inside your pan, without any hint of browning, all while praying your yolk doesn’t break. It should definitely be named flipping hard. First egg in the pan, the whites aren’t cooked enough and too much oil. The second egg, the yolk falls apart in the bowl before it even goes into the pan. Egg number 3 does a kind of half flip when it lands. The fourth egg gets a tiny bit of brown before it is flipped, not acceptable. Egg number 5 doesn’t have enough oil in the pan and is stuck, unable to flip. Feeling a bit discouraged, I scrape another egg into the trash and try again. I’m running out of time before the next rotation change. 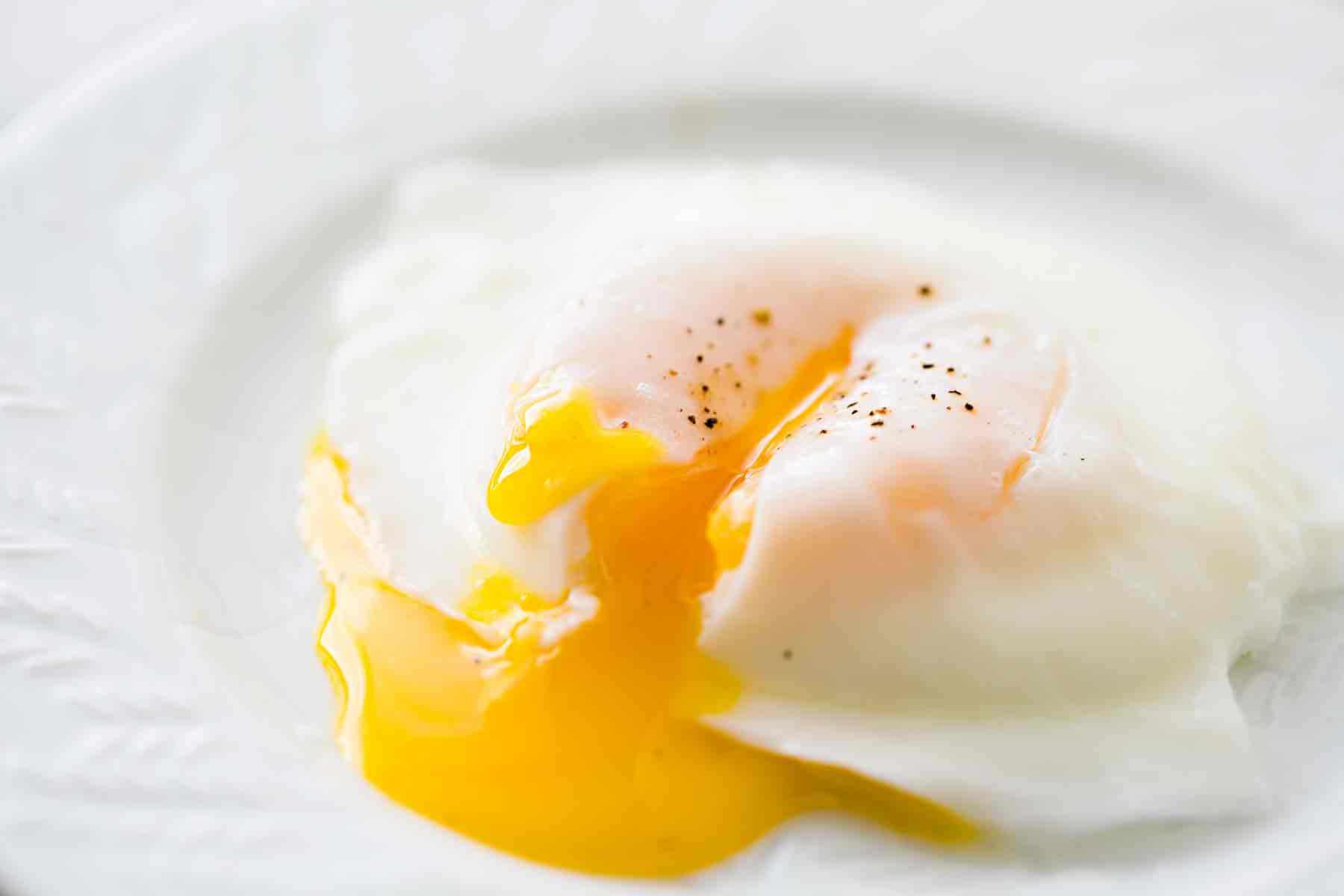 So I oil my pan, I wait until the white looks reasonably cooked and slide the egg to the rim of the pan. “It’s all in the wrist,” I think to myself as I get ready for the big shot. And I make the flip. She shoots. She scores. Slam dunk! And the crowd goes wild!!! Ok, so in the culinary world it is probably more like my 8 year old son on a Little Tikes hoop and not Michael Jordan in the 90s, but in my world, it is definitely a slam dunk.

I plate my masterpiece and Chef cuts into the perfectly cooked egg and the yolk runs smoothly all over the clean white plate. I’ve done it. I’ve cooked an incredible, barely edible egg!