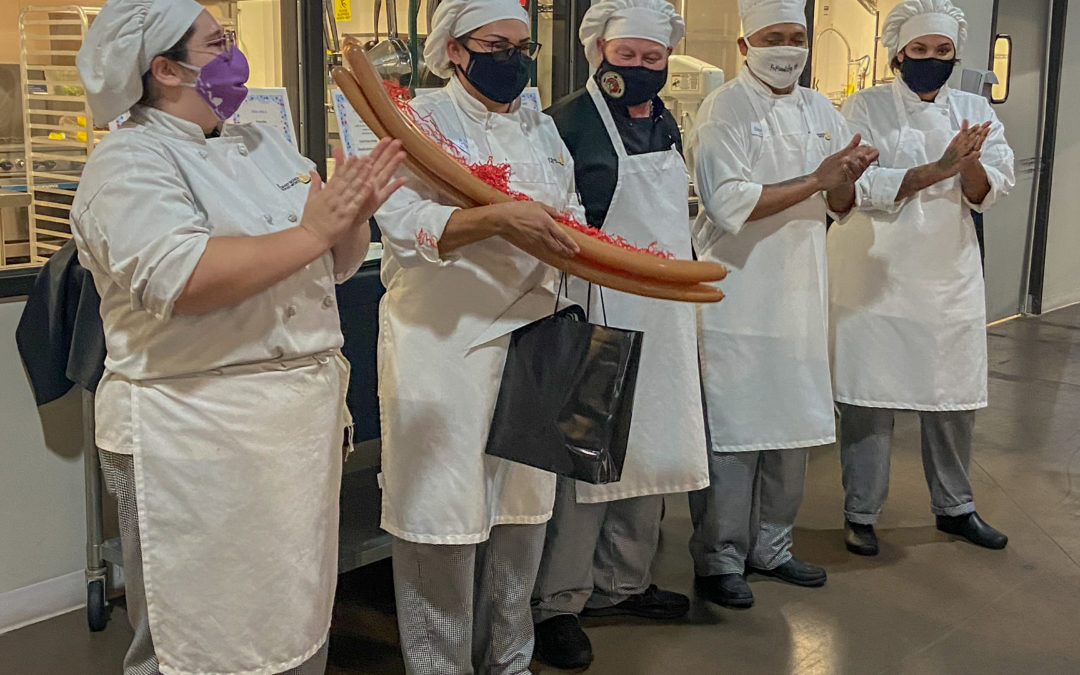 The Culinary School of Fort Worth celebrated September 17th’s Constitution Day with a hot dog/corn dog cookoff competition. Five students showed off their cooking skills on Facebook Live while competing for a grand prize of two cookbooks and the coveted hot dog balloon trophy (pictured above).

Student chefs Tina, Kisha, Gabby, Jerry, and Stephen, all in their fourth semester at The Culinary School of Fort Worth, were given three hours of prep time and one and a half hours of cook time to create their specialty hot dogs and corn dogs. Each student presented two of each, one judged for taste and the other for presentation. The contest was judged by CSFTW Chef Mark Hitri, Financial Aid Coordinator Peter Ramos, and alumna Wendy Chavez.

For the winner of the competition, Tina, this competition allowed her an avenue to have another fun experience to grow closer with her classmates.

“We’ve all gone through a lot with COVID, so this felt like another thing that we could check off the list together,” Tina said. 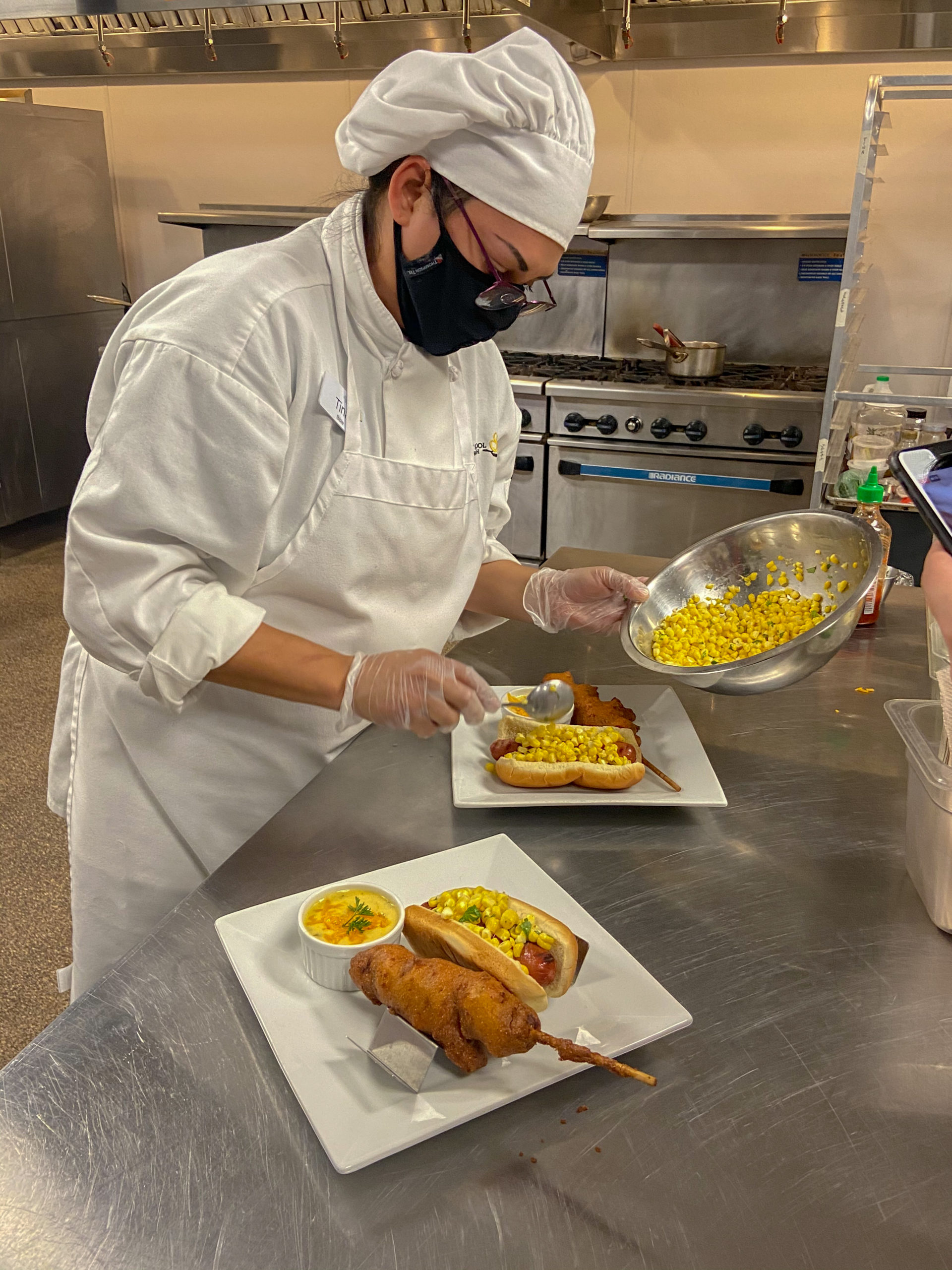 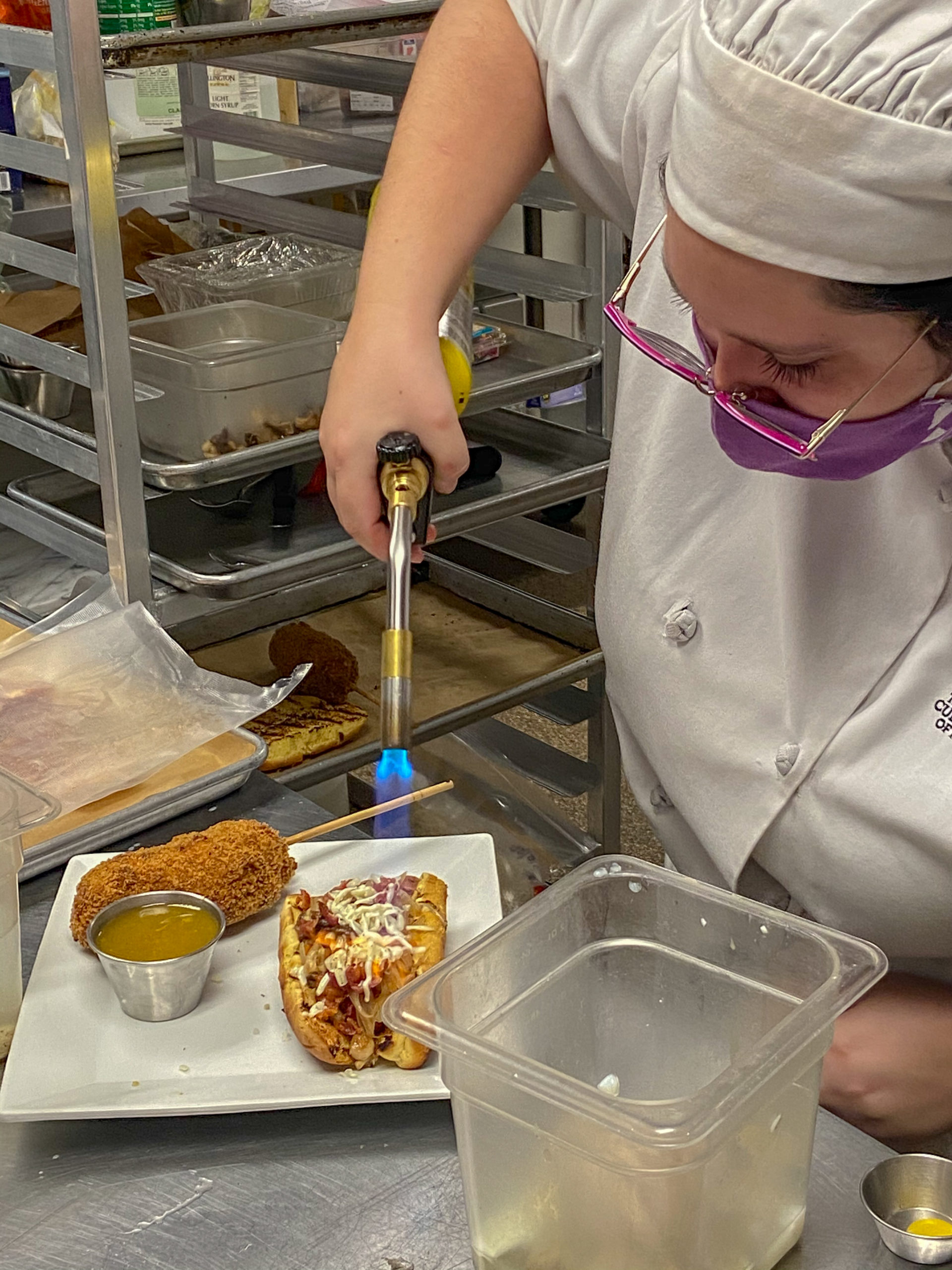 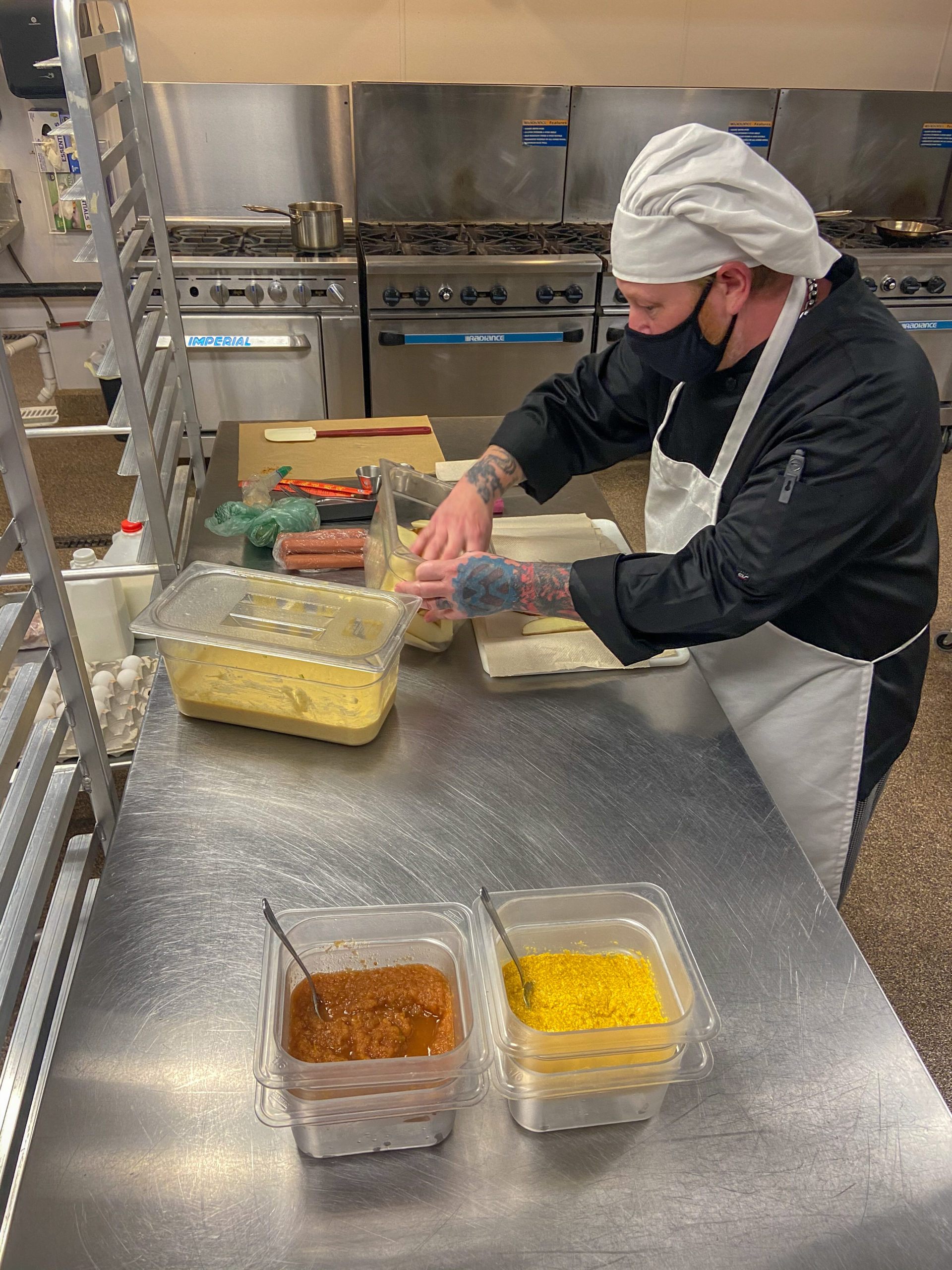 These thoughts were echoed by all of the competitors who were excited to be competing against their classmates and pushing themselves outside of their comfort zones.

“I signed up for the competition just to see what I could do when put under some pressure,” Stephen said. “I also felt like this was a great opportunity to go against my classmates who are all some of the most creative people I’ve ever been around.”

That creativity shined through immediately as Kisha presented her dish first. She went away from the traditional corn dog route and fill hers with shrimp instead. This shrimp corn dog, which she described as fluffy and sweet, was topped with lemon aioli and a honey cayenne drizzle.

While Kisha went way outside the box for her dish, Jerry decided to stick with a more traditional approach.

“I missed not being able to go to the state fair this year, so I wanted to keep everything more traditional and in that fair style,” Jerry said. “I’ve been doing this for years and all of these recipes are mine – the chili, the ketchup, the mustard. Everything.” 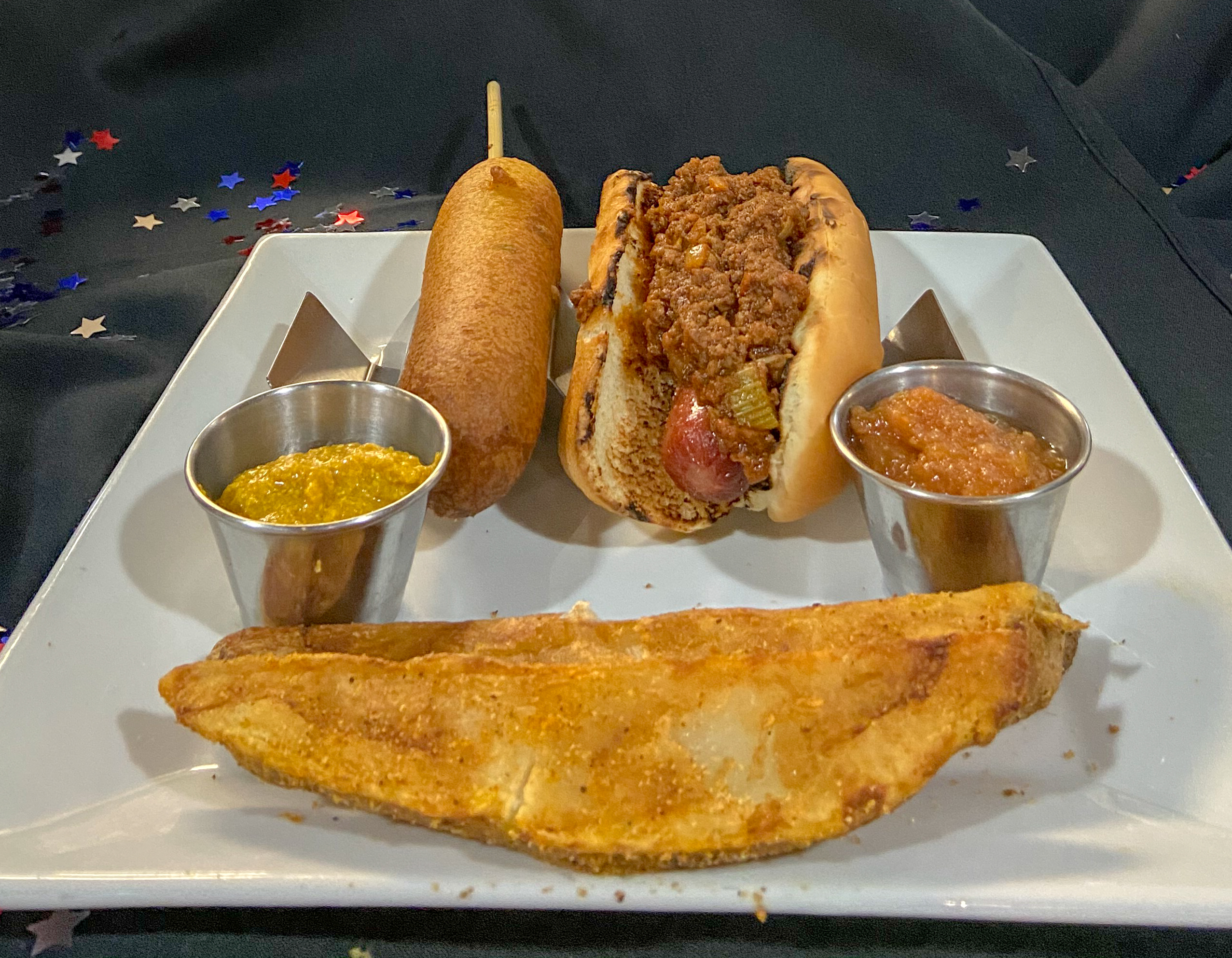 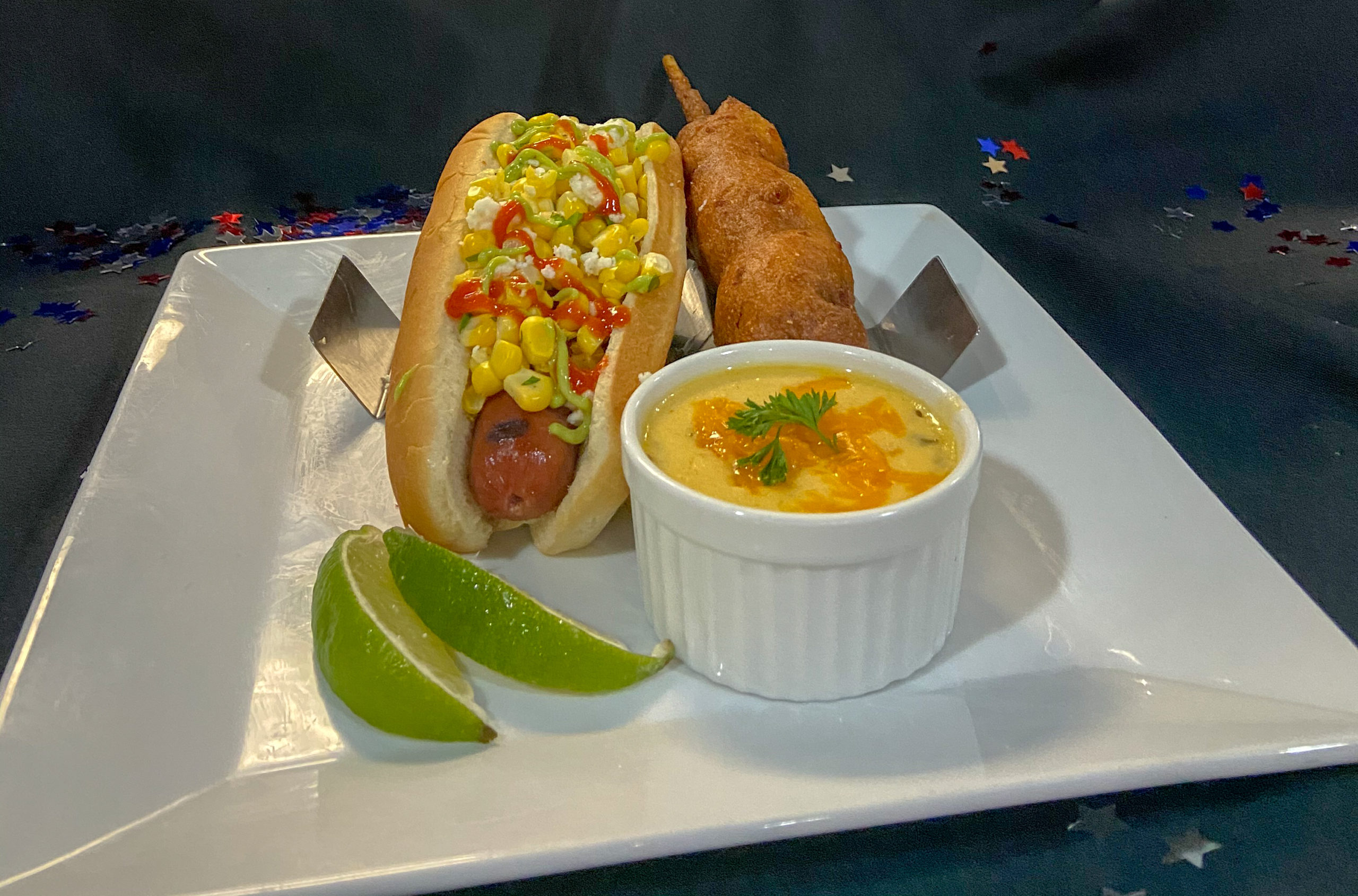 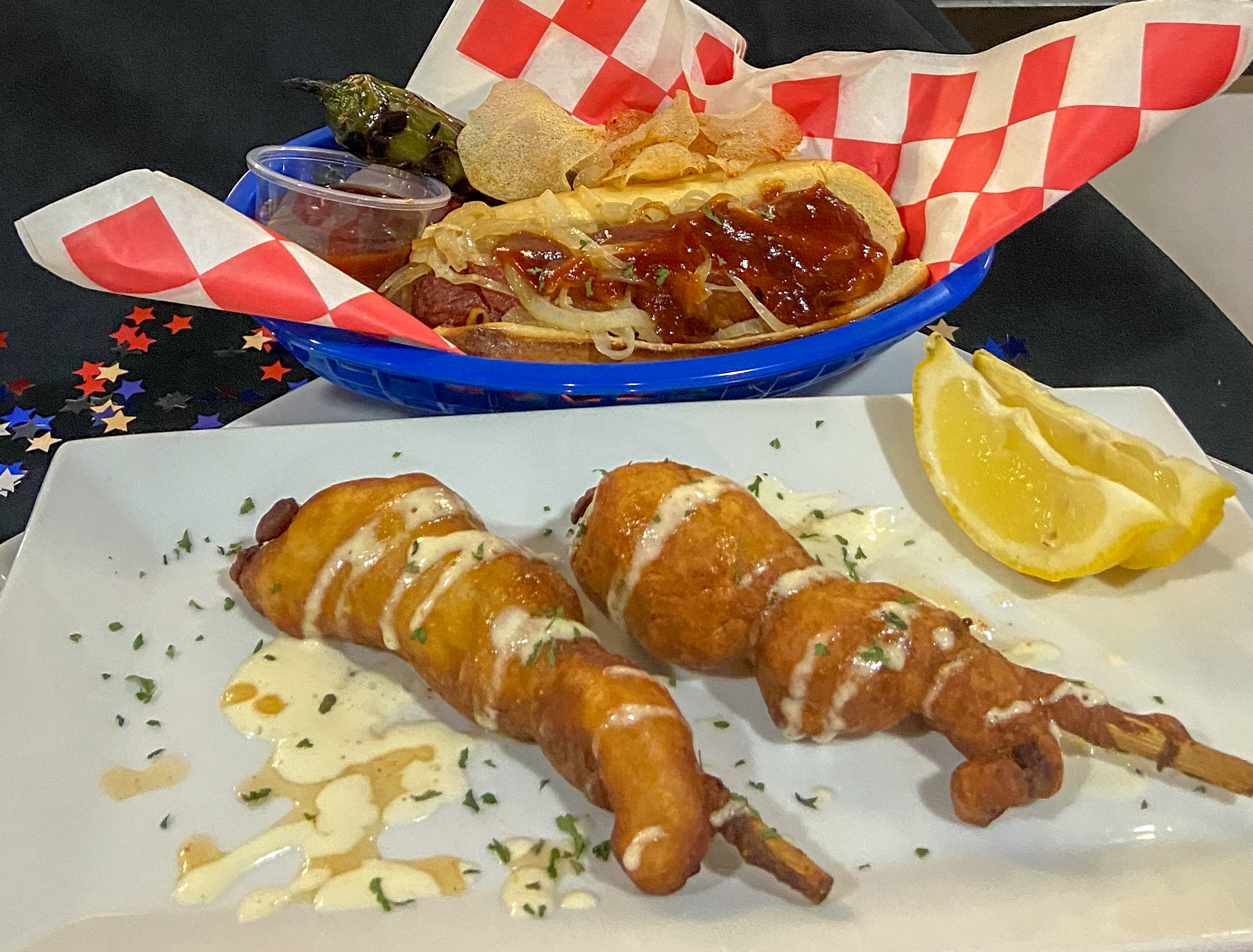 Jerry’s hot dog was grilled and topped with his scratch made chili, mustard, and ketchup. His corndog was fried with a light and fluffy jalapeno batter. He took great pride in both items after having experimented and perfected both over the years.

Unlike Jerry’s dishes, Gabby’s hot dog and corn dog couldn’t have been further from traditional. Her hot dog, which see called a “torched fusion dog,” was topped with Escabeche veggies, mushrooms, onions, bacon, potatoes, cheese, and a quail egg yolk sauce. For the corn dog, she went with a bacon-wrapped sausage that was fried with a jalapeno-corn batter and featured a mango habanero sauce on the side.

Despite that delicious combination of flavors that would tempt almost anybody, the only person who didn’t get to try any of her food was Gabby herself.

“I’m a vegetarian, so this competition was interesting for me,” Gabby said. “It’s not always easy to cook something that you don’t eat which made this a good challenge.” 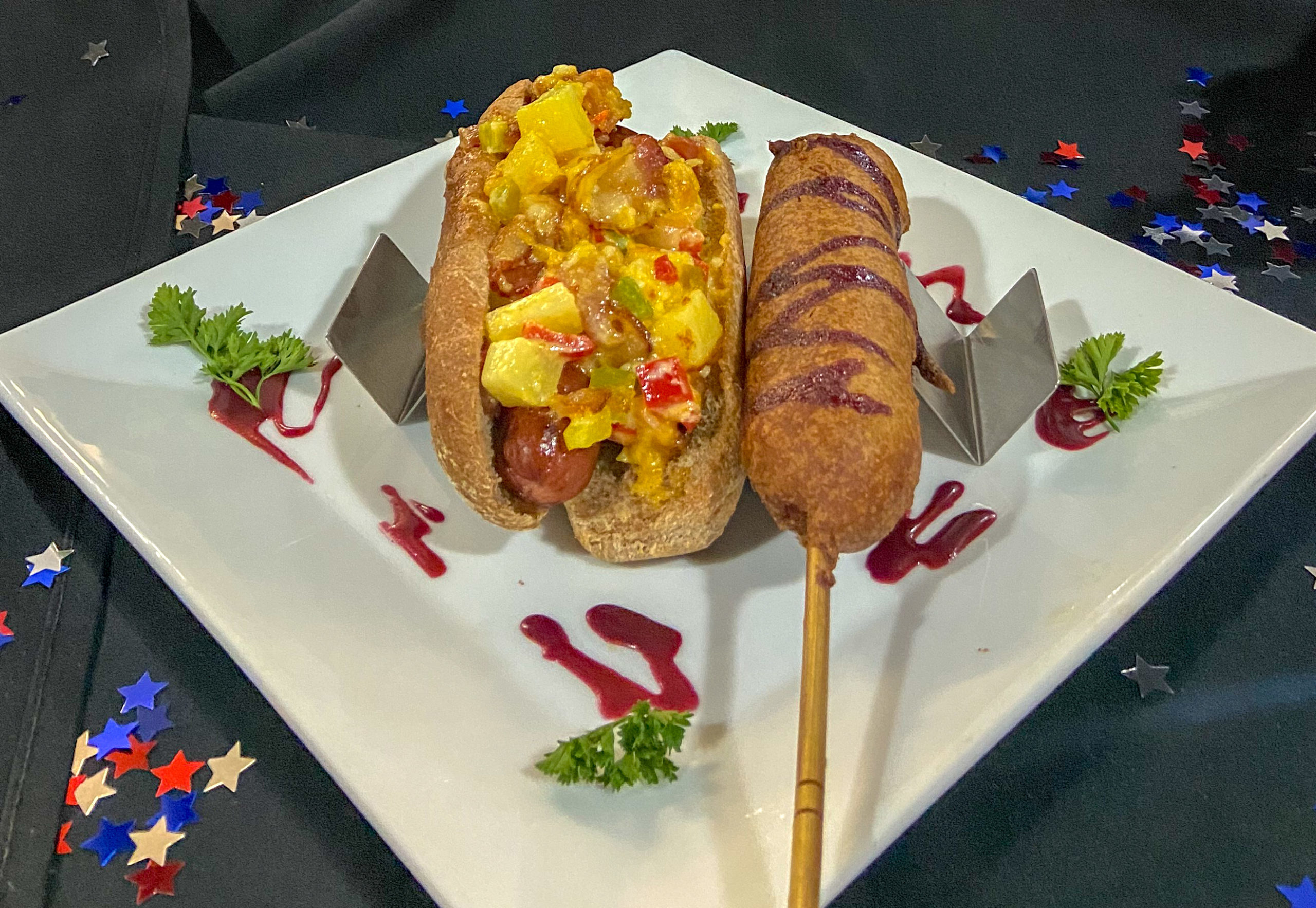 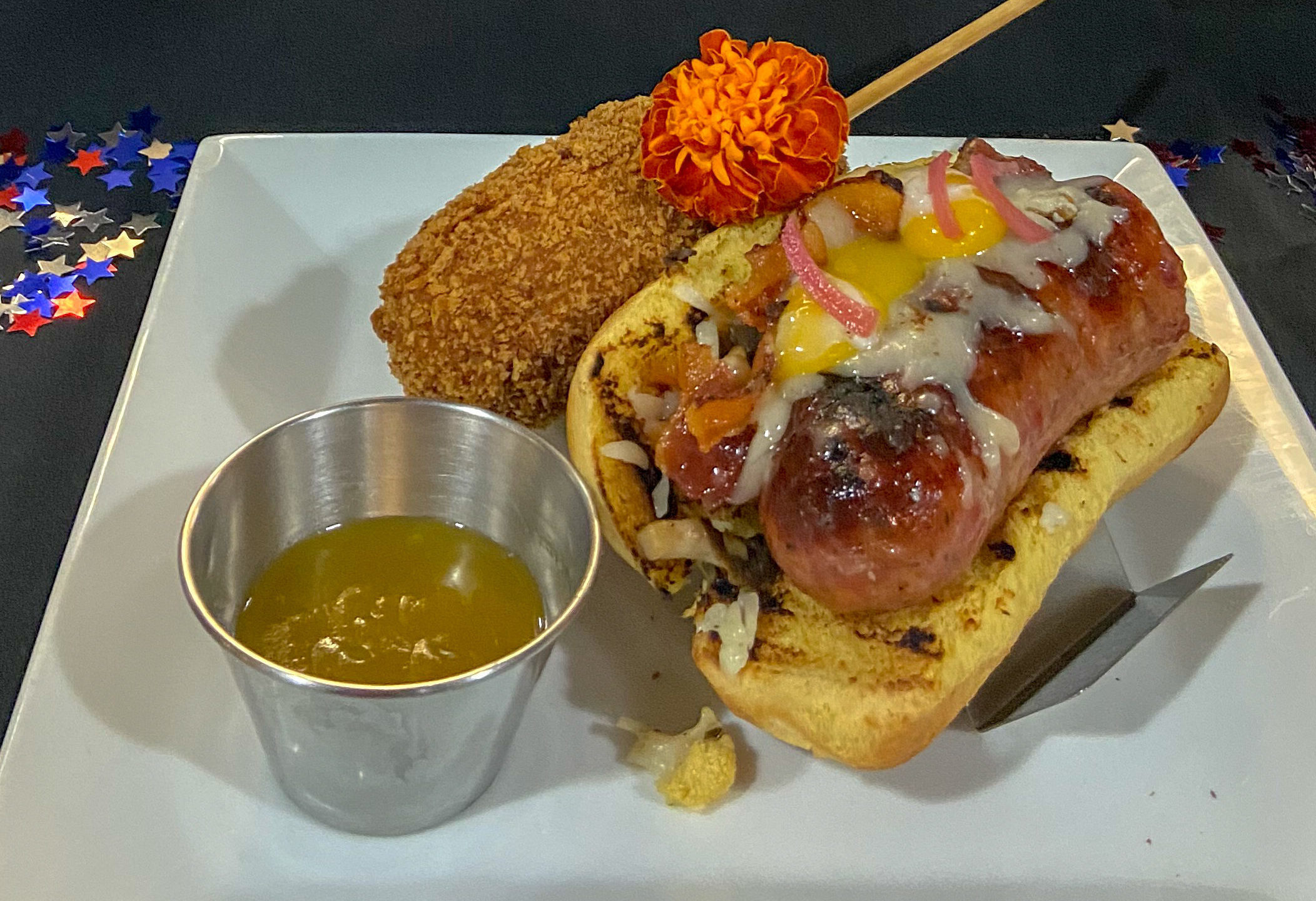 Stephen, who wanted to make something special to stand out from his talented classmates, also broke away from tradition. His hot dog was topped with his self-proclaimed “delightful potatoes,” but it was his corn dog that stole the show. Stephen made a breakfast corndog that featured a blueberry batter and was topped with a berry coulis.

Finally, Tina, the eventual winner of the competition, landed somewhere between traditional and outside-the-box for her dishes. Her hot dog was topped with Elotes and an avocado siracha crema, and her corn dog was filled with bacon, cheddar, and jalapenos and featured a creamy beer cheese sauce on the side.

In the end, this competition was more about the learning experience than actually winning for Tina.

“Everyone was amazing in this competition, and it was so fun getting to compete against all of them,” Tina said. “I learned a lot today, and I’m going to use those lessons moving forward.”