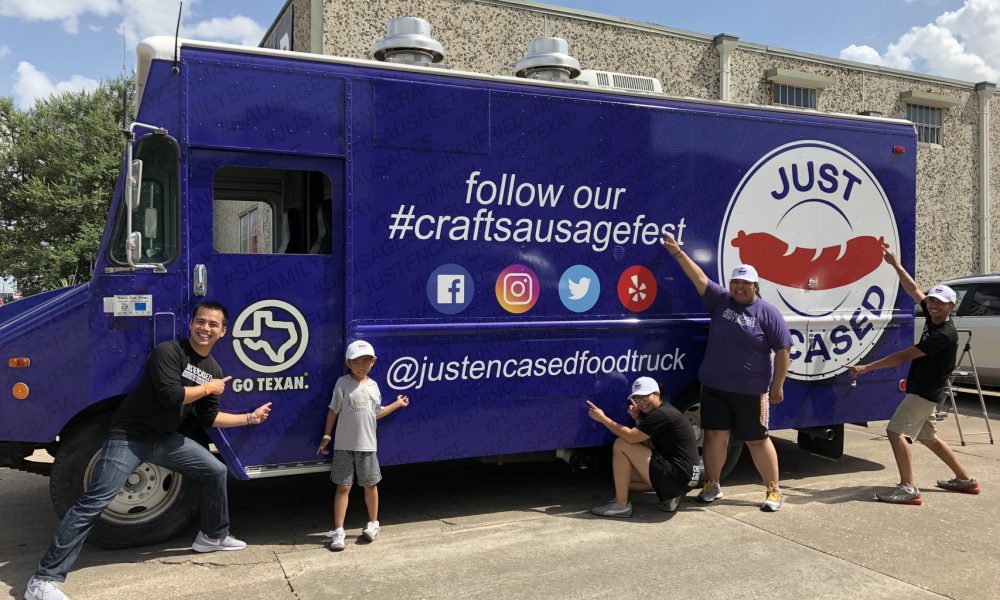 Today we’d like to introduce you to Samuel Chee and Ched Pagtakhan.

The story begins almost 3 years ago. Ched and Sam were chatting about starting a food truck in Chicago. It was going to be a sausage food truck. But it was still just a thought and not really an executable idea. Then, Ched and his family, Rosemary and Avery, came down from Chicago (where Ched and Sam were raised), to visit Dallas just for fun. They toured the Dallas Farmer’s Market and DFW restaurants. During this time, they realized that the Dallas food scene was in it’s early stages of becoming a “foodie” centric town. At the time, the Dallas Farmer’s Market was starting its transformation into a market that supported only local farmers and artisans. From that visit, Sam and Ched decided to bring the sausage concept to Dallas. Instead of a food truck, they started out with a pop up booth at the Dallas Farmer’s Market, where they sourced all their meat from local ranchers at the market. The idea was to create a farmers market product out of farmers market products. They even used local pecans, potatoes, mushrooms, eggs, bread, and other veggies from the same market. The idea became Just Encased, craft sausages made from scratch by Ched and Sam. And it would be a “meal in every bite.” Each type of sausage was handmade by the both of them. It first started out only on the weekends, where Ched would fly back and forth from Chicago (he didn’t want to move his family right away until the concept was established). That meant that Ched and Sam would be making sausages late Friday nights to serve on Saturday and Sunday at the Dallas Farmers Market. Ched was the trained chef and Sam was the go-get-em salesperson. The craft sausage concept was picking up steam at the market and regulars were starting to come by, which they called Super Fans. Once that happened, Ched, Rosemary and Avery, moved to DFW to take this concept to the next level. It was still only on the weekends for a couple years, but then in February of 2018 they opened up their Just Encased Food Truck! Now they are touring breweries, weddings, corporate lunches, and catering. Join them for their #craftsausagefest by following them on IG @justencasedfoodtruck.

Overall, has it been relatively smooth? If not, what were some of the struggles along the way?
Not fully smooth, but truly a learning process. At the beginning, it was balancing our day jobs with our weekend business. Towards the end of our time at the farmer’s market, there was more food competition. The ups and downs of your sales everyday was always an interesting ride.