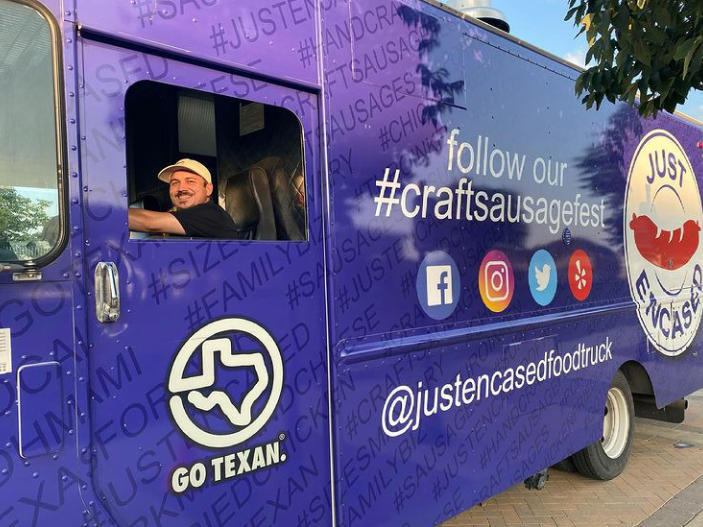 As we continue our series of highlighting our instructors, students, and alumni by telling their stories of successes, aspirations, and inspiration, we sat down with Michael Thibodeau, a graduate from The Culinary School of Fort Worth in May 2020.

Michael: I didn’t have much experience in the culinary field before I started at the school. It was more of just a passion and something that I really wanted to do. I had a few jobs in the industry but nothing on the line or anything like that. The school seemed like a great fit for me at the time, and I was really happy that I ended up choosing it. Definitely no regrets.

What have you been doing since graduation? Where are you working now?

I work for the Just Encased Food Truck. I manage and cook on it. I’m also driving the truck around, producing sausage, and whatever else they have needed for the past year.

What was it like doing your externship with Just Encased for CSFTW Chef Ched and then being asked to take over the truck after that? Were there any nerves?

I wouldn’t say I was nervous. I was definitely surprised that he was asking me to take over. I didn’t have much experience, and I’d only been working for them for about three months. When he asked me if I wanted to take over I said, ‘Definitely, I’m down to do it, but are you sure you want me to take over?’ It was kind of like a sink or swim situation at the start. He was trying it out, and it has all seemed to work out pretty well. I was never really nervous about it, but there were some times that I thought maybe I wasn’t the right pick for the job. We’ve never had any issues though, so I guess whatever Chef Ched saw in me was actually there.

How did you handle that self doubt?

I try to just push it out for the most part. I look back at the events and other things that we did where things went wrong or not completely perfectly, and I try to reflect on what happened and why I did it a certain way and how to improve and get better. I use any self doubt that I have as a way to grow and make sure mistakes don’t happen again.

Did you always want to work in a food truck or what were your culinary goals?

Yeah, I actually think when I was writing my entry essay into the school it was about wanting to work on a food truck. Chef Rosemary had reached out to me about helping out Just Encased as a front-of-house person. I helped them out for their Oktoberfest event that they had at the culinary school. That’s where I met Ched, but I called him ‘Chet’ the whole time which he didn’t love. *laughs* When it came time to choose my externship, I put down Just Encased and circled it big to say that that was the one I wanted. Luckily they were hiring at the time, and I was able to join their team.

What would you say to someone who wants to get into the food truck industry but hasn’t had any experience on a truck?

Just go for it. The food truck industry is a lot different than line cooking and jobs like that. The staff is more like a family on a food truck. If you worked at a hotel or something like that, the management doesn’t really care if you like each other or not. They just expect you to do your job, but on a food truck, when we hire people, we feel them out for fit. Try it out and make sure that it’s the right fit for you.

Who are some of your culinary inspirations?

I would tell them to just come up to the school and check it out. Do the walk through tour and maybe shadow a class. Feel out the school and be honest when you’re doing it. Tell them what you really want out of a culinary program and what you expect. It’s important for them to know where you are so they can be honest and let you know if they’re going to be the right fit. I think it’s important to have that honesty to see if the school is the right spot for you to get your foot in the door. It worked out great for me.